Track 10: The Washerwomen of Limerick 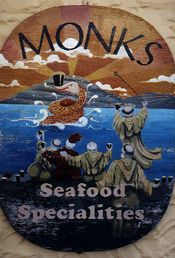 The pope sent men to ireland some hundred years ago
Heavin' heard the rumour of some leisurous monks and so
he sent his priests to Limerick to bring them back to order
stop their joyful way of life and happy things they do.

They go for hunting go for fishing, Lobster, Cod and salmon
sit in pubs for drinking bear, like all the other people here
making music all the night, the session goes till mornin'
Fiddle tunes and ballad songs, jigs and reels and more.

And when they came to Lim'rick town, they met some Washerwomen,
they questioned them about the monks, the women answered Latin;
enquired then in Latin, in Greek the women answered
further asked in Greek in Hebrew they where told:

Havin' met these women, the priests died frightened say:
“My Goodness in this country, we havn't got a chance!
If all are educated like these Washerwomen,
how wise than the monks will be, we have come to see?"

The men from Rome returned back home as quickly as they'd come
spreading round the news of educated Ireland.
The monks disguised as women removed their false attire
went back to their monastery and lived on like before.